It all started about eight weeks ago. My friend Angela and I were chatting and I needed motivation to get back in shape and ready to start the half marathon training at the beginning of August. We looked at a list of races and decided that the Seafair Torchlight 5k was the perfect run to get me there.

Well, I wasn’t the only one that needed to get in shape to start training – at the tail end of my pregnancy, I manipulated my poor dad into running the half marathon too. So when I decided to do this race, of course I had to guilt him into it. (Since then we now have my dad, Scott, Kim, and Denise doing the half marathon! Angela is still on the fence, but I have a couple of months to work on her).

What started off as a daunting and seemingly impossible task for my dad(running the whole thing), he began a diet and exercise plan that led him to losing 25 pounds and getting prepared to run. He did much better on the dieting part than the preparing to run part – often times I would check in and he would have been getting exercise via yard work instead of logging mileage. I can’t complain, my mom was getting the yard taken care of and he was still doing very strenuous work to get exercise. He did get several runs in where he was able to jog/walk good distances and even a few where he ran the three miles.

Fast forward to last night where Scott decided to join dad, Angela, and I on the run last minute. Since it was my dad’s first race, we decided to stick together for the run, going at his pace and letting him determine whether we would walk or run. We were there for encouragement and to be part of a wonderful moment in his life.

Part of running a race means knowing certain things – how to put the time chip on your shoe, knowing that they will give you safety pins for your bib, knowing where to line up and when to start your watch to get a “race time” and as Scott so eloquently put it, “Don’t be one of those people that I have to kill who get to the watering station and stop right when they are handed their water. You need to keep running with it and get out of the way if you need to stop to drink.” It was really fun to experience those firsts again with my dad.

To be honest, I figured dad would end up walking portions of it. He was nervous (as everyone is at their first race) and there were some pretty decent hills that we would have to run that rivaled the hill out my backyard.

We set off running part of the parade route – there is nothing like 250k people cheering for you! We had so much fun running together, enjoying the route, taking everything in, and my dad did great.

And he ran the WHOLE THING.

I am so proud of him – he went from feeling like something was an impossible task to complete to doing it. I don’t know many people who can claim that they were able to run their first 5k at 66 years of age. To say that is impressive is really an understatement.

But it doesn’t stop there: Next up – training for the half marathon. I know he can do this too.

Here are some photos that Angela took with her phone of us along the course (thanks so much Angela!!):

Dad along the course 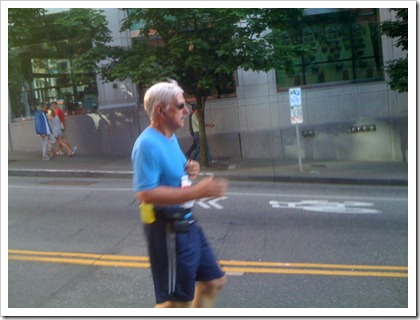 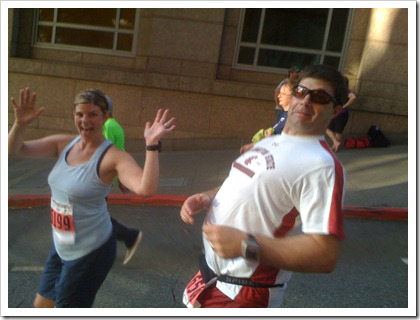 All three of us together

It really is impressive! He reminded me of all the little things I just take for granted about doing races – down to the timing chip and bib number questions. Also, you guys shared a great moment in time that not many families these days do – enjoy the memories – it was a great day!