Carter has been on a roll this week with all of his cuteness. We give Carter lots of kisses, and like any boy, he doesn’t want anything to do with it. However this week, there was a notable change one day.  I started making kissy noises at him and he all the sudden leaned his head into me so that he could catch the kiss!  SO CUTE.  Best part – he only does it for his mom (not that I am happy about that or anything ;-)

So I am FINALLY getting to posting the before and after photos of our backyard. The yard was a ton of work – I think we had several hundred blocks, 10 yards of dirt, I would guess near a hundred flowers, several hundred fence boards, and a handful of fence posts and cement. The last thing on the list is to get the exterior painted and I just lined up a company and just need to get it scheduled!

So apologies on the crappy pictures.  I should have taken everything when it was cloudy, but THANKFULLY we haven’t really had any cloudy days! So please be patient with the terrible lighting.

BEFORE: This is right after Jeremy aerated the lawn, so it looks particularly bad. Notice the fence, the raggedy bricks…

BEFORE: The main back area, with Swing. Lots of overgrowth, keystone bricks.

A little different angle, but now…

BEFORE: The angle side with lots of overgrowth 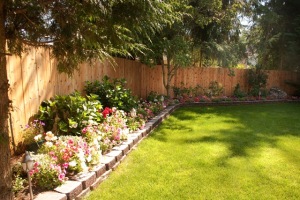 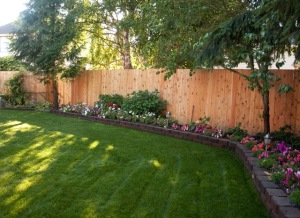 And some other random shots: 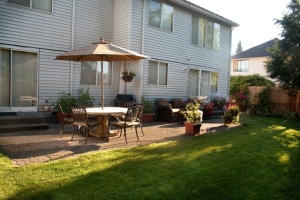 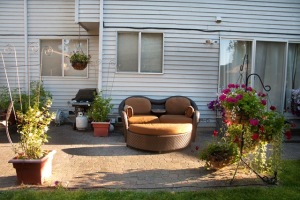 Holy cow! That looks so good! Congrats on a total yard makeover!