If I never see another hill again, it will be too soon.  The Mercer Island Half Marathon was the hardest run I have EVER done in my entire life.  I swear it felt like it was all uphill!  And the easy downhill parts had the road at a slope, so you end up struggling against that.  And then the bigger downhill parts were fast and steep, so the majority of the distance that you ended up running was uphill.  SO GLAD that it is over, and so proud that both Angela and I ran the entire thing – that was our goal.  I finished in 2:21, which isn’t bad considering the amount of hills – total elevation gain was around 2k feet, which was quite a bit more than I was used to running.

I never got a photo of me crossing the finish line in Leavenworth and it was rainy out, so Jeremy and Carter weren’t there yet to pick me up, so I improvised for this race: 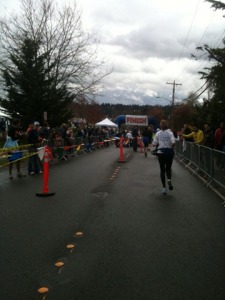 Sadly we found out that the crowd of people gathered in the street off to the left were there helping a man who just had a heart attack.  The ambulances came right after I crossed and I never heard what happened to him.  Hope that he is okay!

Congrats to Angela as well – we both agreed we would NEVER RUN THIS RACE AGAIN.

Burning Down the House