Jeremy is up at the cabin this weekend for an owners work weekend and since I was supposed to run the Olympia Half Marathon tomorrow, Carter and I were on our own.  Original plan was to head to Olympia this afternoon to stay in the motor home with Grandma and Grandpa … except then I found out 3 lanes of I-5 southbound were supposed to be closed all weekend.  Um, aren’t there only three lanes on the freeway?  Yeah – being stuck in a car for several hours with the “EEEE!” kid did not sound smart.  The lame side of me took over and I bailed on the run – it was just too much hassle at this point.

The bright side of this is that I enjoyed a wonderful day with Carter.  He was a bit cranky in the morning, but after his second nap of the day, things turned around considerably!  We spent some fun time outside together, where I got some great photos.  And each naptime I spent out in the yard, trying to get rid of the final remains of the dirt pile.  ALMOST THERE!

This first shot reminded me why I love photography so much.  Definitely printing this. 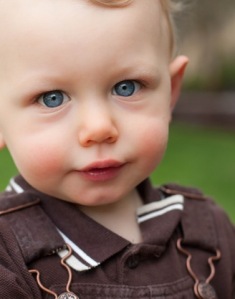 Carter Hamming it up with my hat

He didn’t keep in on for long, but this was one of the better shots.

I was having to bribe him with snacks in order to sort of sit still – always a challenge with him! 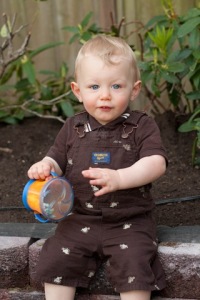 Of course we have to have the football out with us!

Thats a cute blog. I have five kids so definitely no fun being closed in the car with screeching kids.

Lisa!!! That first pic of Carter, in particular, is faaaaantastic!!!